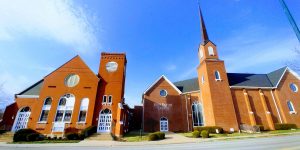 Located on West Truman Road, the First Baptist Church of Independence, which has undergone renovating, traces its roots back over 120 years to 1896. As such, the church has been a part of American history and is listed on the Historic Registry.

Queen City of the Trails

Independence Missouri was the declared the starting point for the Oregon Trail by no less than an act of Congress! The City of Independence is still considered the “Queen City of the Trails” as it was a point of departure for the California, Oregon and Santa Fe Trails.

Decades later, it was into this bustling city that The First Baptist Church of Independence was established.

President Harry S. Truman and his wife, First Lady Bess Truman grew up and are buried in their beloved city, Independence. Their home and The Truman Library are both popular tourist attractions.

Built well after the Civil War, the church has endured over 120 years of Missouri weather. 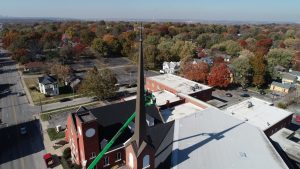 Cornell Roofing and Sheet Metal was hired for renovation of the church roofs and steeple, bringing them back into shape after many years of wear and tear.

As the images show, the finished look of the renovated roofing system and steeple give the church a fresh new look.

The attached short video shows a Cornell team member putting the finishing touches to the steeple and gives a birds-eye view of the beautiful new roofs.

The renovating of the church also includes the restoration from inside and out. These efforts culminated in the recent 1896 Building Restoration Benefit Concert to restore the worship sanctuary.

Cornell Roofing is proud to have played a part to help bring back the First Baptist Church of Independence to its original glory. For more information on the church, you can visit their site at: www.fbcindep.org