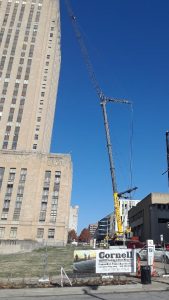 Facing the re-roofing of City Hall in Kansas City. The building opened at a cost of around six-million dollars. This was 30% over budget, but hey, these were the Pendergast years. Such spending was not uncommon given the 30 million-dollar bond package that was pushed through with many cries of tampering and fraud. This funded City Hall, Municipal Auditorium and numerous additional projects at the time.

for Cornell Roofing. From both safety and equipment standpoints, our team was up to the challenge!

Neoclassic architecture with incredible interior and exterior art deco details and imported stone from around the world, made the building one of the most beautiful to this day. The story of the development of the city’s third city hall (the first two were in what is now the River Market), is still impressive to this day, leaving many first-time visitors in awe.

In order to accomplish the task of re-roofing City Hall, Cornell brought in one of the largest cranes in the Midwest. And, we’re not talking about any regular crane. Weighing in at 550 tons, The Blue Hat Crane’s impressive reach allowed the Cornell team to reach the 443 foot roof with height to spare. This allowed our team to safely bring materials up and debris down in order for safety during the process of re-roofing City Hall.

When not in operation, it covered almost the entire South side of the building, along with one lane of Locust street.

The assembly of the crane was captured in the video below. Taken from the roof and set to fast motion, it is hard to tell what you are looking at. From this vantage point, men appear to scurry back and forth.  In a little over one minute, you can see the day passing while the re-roofing of City Hall was underway. Look close and you can also see a crane we needed just to assemble this beast! A day-long effort just to prepare for the job ahead.

Cornell Roofing & Sheet Metal is proud to play a part in maintaining one of Kansas City’s true architectural masterpieces.